The wedding party arrived in Pacific Palisades at the reception hall which our friends had decorated beautifully. Unbeknownst to me, James had plumeria and carnation leis flown in from Hawaii which filled the room with wonderful tropical aroma. Here’s a photo of Danny one of James’ members who is now the main leader in the organization. The other couple is Eddy and Lee who I worked with at the phone company. Lee was like an adopted mother who taught me many valuable lessons.

I was in such a daze as it all unfolded, but a happy one at that. Friends, photos, food, champagne and music.

This was a special cake. Originally it was for a wedding and a graduation. The bride and groom were on the top and the graduating figures were on the bridges, but we put flowers on the bridges to the other cakes. There was a chocolate fountain at the bottom.

Our wedding cake. Chocolate fountain on the bottom, carrot cake on top, chocolate cake and white cake as well.

Eric and James’ friend who dropped the flowers from his plane.

Sandy and Cheryl and Steve’s daughters.

The dinner line up.

Jerry and her daughter Susan. 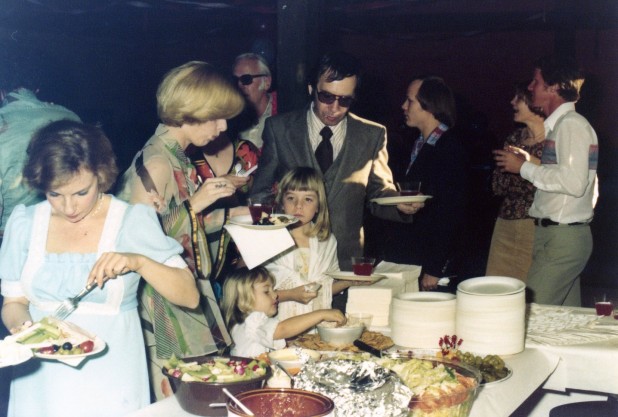 Friends and family enjoying one another’s company, food, and dance. We had a blast.

The Cutting of the Wedding Cake

James had these lei’s sent over from Hawaii for the family. 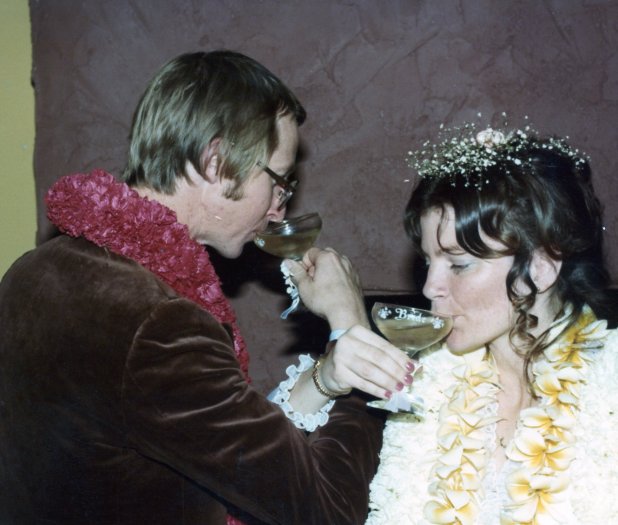 Our friends toasting us.

We had fallen in love to Strauss’ Blue Danube Waltz which we wanted to play at our wedding, but somehow the record was misplaced, but showed up at the reception. The Hustle though was the real hit. Greg’s band did an amazing job. 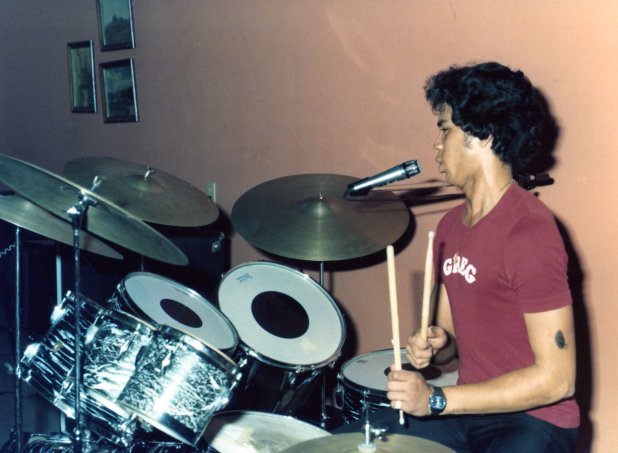 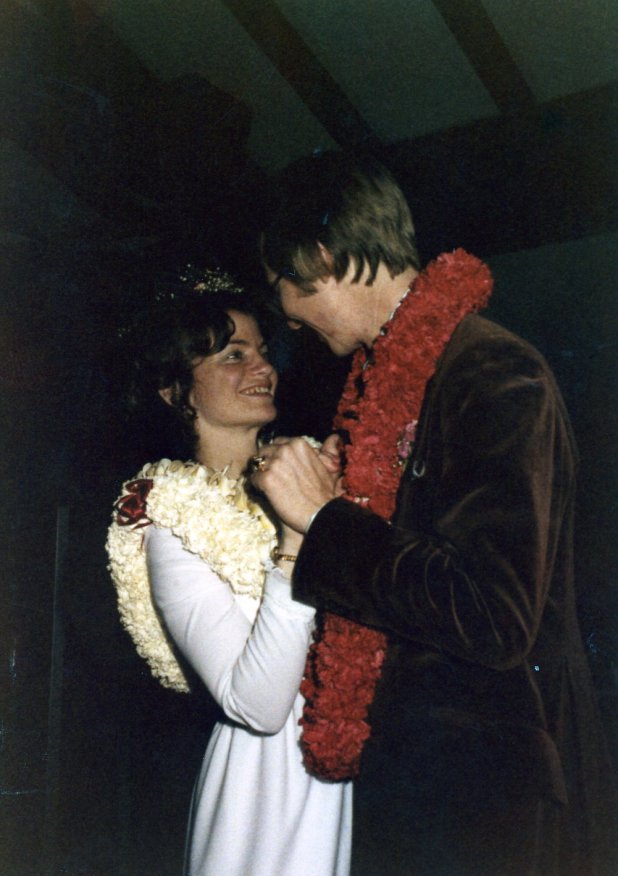 What would 1978 be without the Hustle? 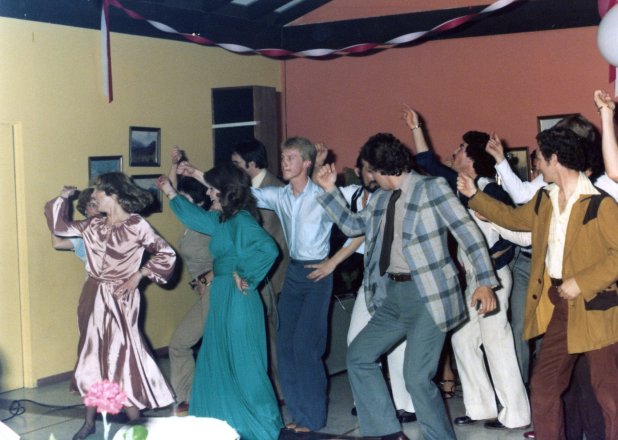 The hall was decorated beautifully and there was food and drink and dancing. That year there was a dance called the Hustle and it was all fun.

At one point we ran out of drinks and James’ mother’s boyfriend ran out to get more. I thought that was so nice of him.

When it was time to make a graceful exit our friend, Jeff again drove us to the Ambassador Hotel. We paid $150 to rent the suite that the Kennedy’s and other celebrities used when they were in town. James had been there once before when he was in high school and went to see Robert Kennedy. James had left earlier that night and then saw the awful events of Kennedy’s assassination on TV.

These pictures are all that remain of that place as it was recently torn down to make way for a new school, Robert F. Kennedy High School.

It was a separate bungalow with its own pool.   Yes, we did use it even though we were so tired. The next morning we took a cab to Union Station and a train off to San Francisco for our honeymoon.

This was taken in the San Francisco Bay.

I had visited the area before and wanted to stay at a quite hotel I had seen before, but this one had the same name but the wrong place and was awful. We came to this conclusion right up front. The door had multiple locks that had been broken off and replaced. The light bulbs were 25 watts so we could not see anything and the sheets did not look clean at all. Next door were some rowdy guys were having a party. We quickly decided not to stay there and found a different hotel. Our honeymoon consisted of some great times with friends at Ghiradelli Square and sightseeing.

We were so exhausted from all the wedding preparations and excitement and decided to leave early and took a plane back to Santa Monica, to our little apartment in Santa Monica. We did not tell anyone we had come back early, unplugged the phone and enjoyed a few days of needed rest. However, when we first opened the door to the apartment, we could barely get in as there were so many gifts that had been collected from the temple and the reception and delivered in our absence. I was very tired but James the night owl wanted to start opening the presents. I still do not know who gave what as the names and cards got mixed up.