My father Vasco “David ” Lascar, was born on March 6, 1926 and grew up in Torino, a city in Northern Italy near the border of France. It was Italy’s first capital city, home to the Shroud of Turin, and the automotive capital of Italy (Fiat, Alpha Romeo). However, following the Great War (WWI), the control of the automotive industry became the nexus of a serious dispute between manufacturer’s and a complex alliance between the communist and national Socialist movement. David grew up in the middle of “Fascist Italy” during the era of National Fascist Party rule from 1922 to 1943 led by Benito Mussolini their totalitarian leader.

At one point in the early twenties over 80,000 automotive workers were locked out without a paycheck. In response, a general strike was declared in Turin of over 500,000 workers. During those tumultuous years, many families struggled to make ends meet. David’s family was no exception. His parents were forced by severe economic circumstances to place two of their sons, David being one of them, in a local orphanage in order that they not starve. His father was a salesman, but success eluded him as many of his countrymen at the time didn’t even have a paycheck during what would become known as the Great Depression.  Little else was discussed about his childhood.

From 1935, Italy became increasingly aggressive in its foreign policy demonstrated by its invasion of Ethiopia showcasing Mussolini’s National Socialist agenda. The League of Nations was hesitant to sanction their attack as they didn’t want to drive Italy into an alliance with Adolf Hitler. Nonetheless, during the summer of 1938, Italy entered into the Munich Pact with Germany, which the allies had signed as an act of appeasement with Hitler. Already the wheels were rolling behind the scenes in the Italian Parliament.

On July 14, 1938, when David was twelve years old, legislation was passed expelling foreign Jews from Italian soil and depriving Italian Jews of their civil rights. World War II was to break out only a year later. During the ensuing five years, thousands of Jews left Italy, as Mussolini tenaciously implemented his Nazi plan for Italy.

On October 16, 1943, when David was seventeen years old, there was an infamous roundup of 1300 Italian Jews on 44 trains under the cover of the Vatican by specially trained SS. He had a girlfriend who believed the Fascist propaganda and boarded a train along with her family to go to a vacation camp until the war was over. The Fascists were trained to cheerfully encourage the Jewish community that in these camps they would be safe and that the government would protect their lives and interests. David tried to reason with the family, but to no avail. It was the last he would see them. Recognizing his plight, he quickly escaped into the hills and joined the fight as a member of the resistance. Ill-equipped and poorly trained, the resistance faced well trained troops who hunted them down. Sometime later he was captured by the Fascists and carted off to a work camp.

The Germans didn’t know that David was Jewish as he had blue eyes and blonde hair. As expected he was not about to volunteer any information.  I was told that his sister had previously appeared in a Fascist publication showing what the true Aryan race looked like. It was a private joke in the Jewish community, if you could laugh at anything at the time. I don’t know if this was “the” poster, but this Italian girl didn’t look happy kissing the Fascist flag.

While reviewing his old records from the International Tracing Service, I was grieved when I read the faded grey lettering on a copy of what was an envelope. It read, “LIST of 7368 Jews who have been taken away from Italy by the nazi-fascists.”  He was listed with eight other Lascars by number and name.  Evidently, they were all rounded up from Genova on March 20, 1944 and then taken to various camps in Italy and Germany.

David “Vasco” never mentioned all of his other relatives by name, so this was shocking. These are family, but where are they now?  Another ITS document listed David “Vasco” as working at Hilfs-Schlosser B’schl.f.Gascompressoren, a forced labor camp in Torino until June 6, 1944, the date according to another ITS document when David “Vasco” and his older brother Renzo (31.7.20) were transferred as forced laborer to the same camp, I.G. Farbenindustrie A.G., Ludwigshafen, Germany.  David was interred there from June 6, 1944 until January 4, 1945. Occasionally, David would leak details about his painful experiences in the camps. He briefly shared about being so hungry that he tried to eat dirt.

At one point there was a turn coat working with the Germans who was a Judenrat (a council appointed by the Nazis to conduct their operations within the ghetto who were later forced to deliver their fellow Jews to deportation trains that took them to their deaths). He knew David and his brother’s lineage, but didn’t tell the Germans because the war was going badly for the Nazi’s at the time and he wanted some leverage if he ever had an occasion to use it. Fortunately for David, he escaped before that opportunity presented itself. I don’t know if David’s brother escaped as well. According to the I.G. Farbenindustrie A.G. his last official date of employment was 4.1.45 (January 01, 1945).

The company is known today as BASF, the ‘friendly, green chemical’ company. On their current website it revealed that, “Ludwigshafen, by the end of the war in 1945, the extent of the damage was enormous: Of 1,470 buildings, 33 percent are completely destroyed.”

Only recently, did I read about the experiences of British POW’s at the camps which began to shed a bit more light on David’s horrific treatment. Evidently, the Nazi’s treated the British POW’s according to rules of the Geneva Convention and were used as psychological weapons and were even allowed to eat their Red Cross rations. They would never eat the gruel that the Germans fed them, so quite often they would pity the cruel treatment of the Jewish POW’s whom they affectionately called “stripees” based on their thin blue-grey striped uniforms, and fed them their rations.

Douglas Bond, a British POW at Auschwitz recalled, “We did learn about the Final Solution, especially on burning days when the wind was in the right direction.” Many British witnessing the extreme cruelty against the Jews which Winston Churchill called “the crime without a name” were beaten and some killed for performing the simplest act of human kindness such as offering his rations to a Jew.

“When familiar faces were missed we were informed that they [had been] deemed unfit for work at the morning check and sent to the “showers.’  Cyril Quartermaine reported similarly. “We could talk to slave laborers and if we missed one after some days we questioned others about where he was, and the answer would be ‘smoke up chimney.’

A Dutch Jew admonished him “to tell the rest of the world what had happened.” Many of them kept copious notes and those British POW’s who survived kept their promises and testified of the heinous Nazi atrocities at the infamous Nuremburg Trials.

“Manna,” was how Norbert Wollheim described British generosity and encouragement, adding that: “England can be very, very proud of these men,…who really proved that even in Auschwitz…humanity could prevail.”

Prime Minister Churchill had been a strong supporter of Zionism and after Weizmann’s invention helped save Britain, he gave his word that a State of Israel would be set up in Palestine after the war with three to four million Jews (Eddie Chumney Restoring the Two Houses of Israel).”

Unfortunately, in 1945, Churchill was voted out of office by a landslide and although the Labour Party made promises to the Jews to secure their vote, after Ernest Bevin was appointed the policy Czar of the Mideast, he repudiated all the pledges made by the Labour Party and “fiercely opposed the creation of a Jewish State.” 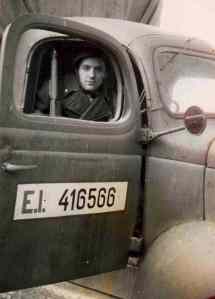 After the war, David continued on to Israel where he fought in the war of Independence in 1948.

David saw Ben Gurion declare Israel a state and watched the last British ship leave. He drove a truck and a tank and experienced the whole Arab world waiting to take over when the British left. But that’s not how it happened, miraculously.

David’s Relative. Don’t know what his name is or his relationship David. Does anyone know if this was his brother or Dad?

David’s sister or mother? Don’t know their name or relationship to David. Does anyone know?

Luglio 1948. Viaa reggio Al Mio Caro Vasco perche sempre in ricardi? Translation anyone? This was on the back of the photo of the boy standing in his shorts on the balcony between two ladies. Family? Grandparents?