David did finally call and came over and visited. I was so surprised. It was unreal to me as you can imagine after nineteen years of separation. James was at work and so David took us out to Marie Callendar’s Restaurant for lunch. It was so strange to be sitting down having a meal with my Dad. My father-in-law Carlton drove the children and I to the restaurant  to meet him.

In the meantime, my sister Adrian and her fiancé Scott had gotten married in Hawaii and were on their honeymoon. Now, where do you think people who live in Hawaii go on their honeymoon? Try Russia. They joined up with a Hawaiian dance company from the islands and assisted them on a tour in Russia. On their way back the newlyweds planned a stop in Los Angeles for a short visit with the relatives.

Sheila, Baby Tay, and Eric in front of the Welcome Mr. and Mrs. Loomis sign.

We pulled together a small family reunion to greet Adrian and her husband Scott. David was first to arrive and greeted his grandchildren. 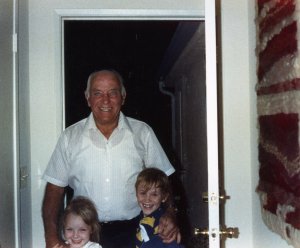 He was followed by my Aunt Sharon and her eldest daughter Rebecca. David had not seen Sharon  (my late mother Bebs’ sister) for years and years. Although they were civil to one another, it was obvious their feelings about one another had not changed.

Here is Adrian and Scott arriving for the reception. 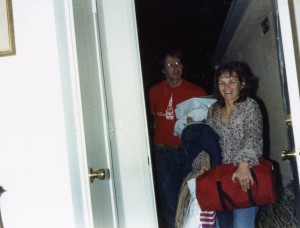 Adrian and Scott arriving at the reception/reunion.

The arrivals and greetings were full of wildly different emotions. Adrian had not seen David for nearly nineteen years.

Reunion between Adrian and David after nineteen years in Canyon Country.

It was such a whirlwind of activity, we had no idea what to expect.

Adrian, David, and I reunited for the first time in nineteen years.

It’s very difficult to describe in words the torrent of feelings and emotions, and strange relief that flowed through my heart at the time. Two daughters reunited with their Dad after nineteen years of separation. It seemed like a dream. The photo tells a story in itself. Aunt Sharon talking with Adrian’s husband Scott, and an old family photo of my great grandparents from Lithuania, and an antique painting James picked up in Minneapolis of the Good Shepherd taking care of His lamb and flock.

Lucky and Jennifer and their girls arrived and brought a delicious cake for the reception.

Our good friends, Jennifer and Lucky and their three girls, Brittany, Marney, and Lindsey.

Jennifer and the lovely wedding cake. 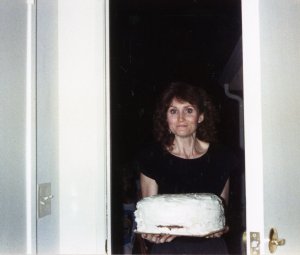 Honoring the Newlyweds-Mr. and Mrs. Adrian and Scott Loomis. 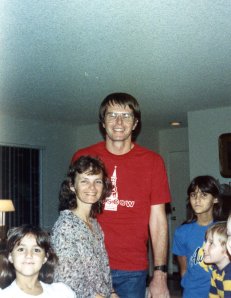 Adrian and Scott Loomis. Lindsey in the foreground and Marney, Eric, and Sheila on Scott’s left.

Time for Cake and a group photo. 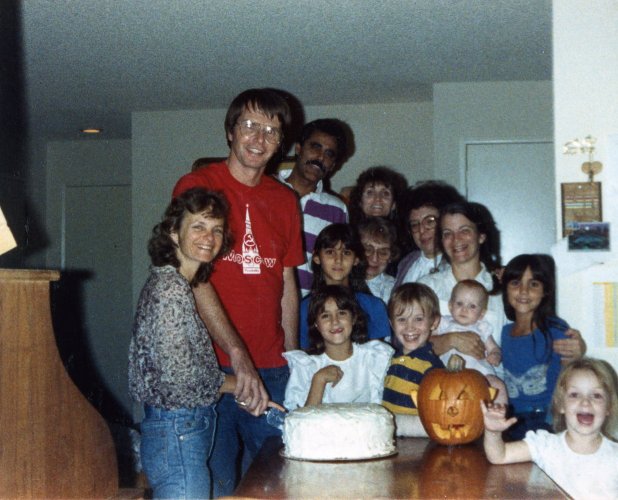 A Toast to the new bride and groom, Mr. and Mrs. Scott Loomis.

The Wedding Toast for Adrian and Scott.

One last photo of Adrian, David and I with Taylor on my back around the table.

Adrian, David, and I with Baby Taylor on my back.

After the gathering, every one seemed to go back to their lives. Adrian and Scott settled in Hawaii. Our family moved to the Pasadena area.  David continued to live at their home in Malibu focusing on caring for Selma who was bedridden at the time.

Carlton, James’ Dad who had lived with us in Canyon Country in our three bedroom house, moved with us to Pasadena to William Carey International University, where we moved into one of the last rentals available, the smallest two bedroom rental house. It was so small you had to get to the bathroom by going through one of the bedrooms.

People would find out that he lived with us and they would ask why he did not live alone. Our response was why should he when he can enjoy his grandchildren? We all loved him so much. How can you trade the love of the grand kids either? No one would have traded the time we had with Carlton for anything.

Carlton was the strong tall Texan and very handsome. As you can imagine there was a slight rivalry between the grandpas.

Two Grandpas and two granddaughters. My Dad David sitting next to our oldest daughter Sheila, my Father-in-law Carlton holding our youngest baby Taylor.

Occasionally, David would come over and then began spending Sunday afternoons with us regularly after we moved to Pasadena. He helped build a white picket fence and a little clubhouse for the children to play in as well.

When we moved to Pasadena, James and David built a white picket fence and James and Carlton planted a bluegrass lawn for the children to play on. Here’s Taylor.

When David came over he commented on how small the house was. You must be saints to live in this little shack. He wasn’t known for his subtlety.  Nevertheless, he loved hanging out at our home and sensed peace in our abode. 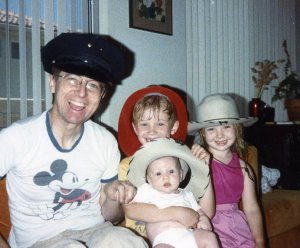 Our hatbox. We had all sorts of hats. James and the children loved to role play with all the various hats they’d pull out of the box.

My sister, Adrian, David and me at Palisades Park in Santa Monica, California area.